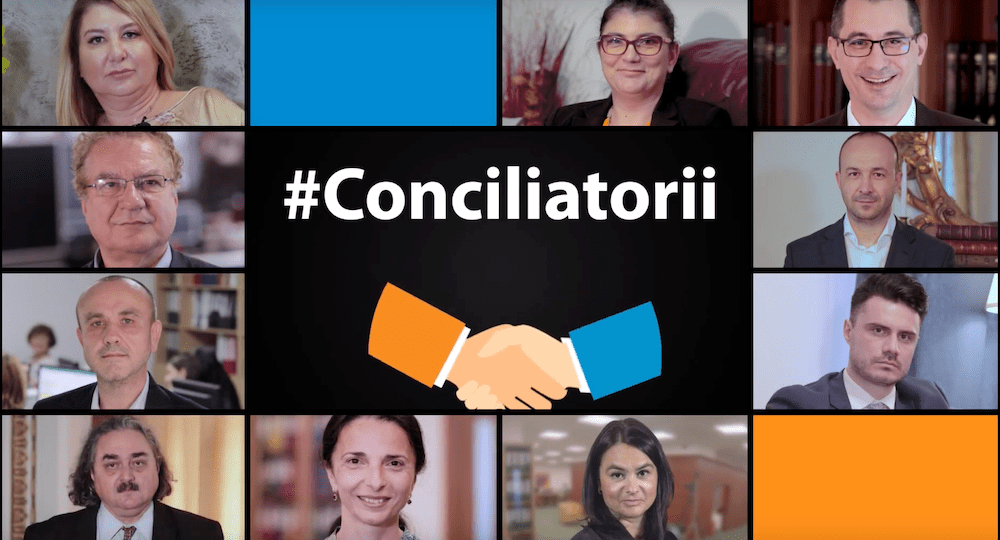 Bucharest, 9 July 2019. The Alternative Banking Dispute Resolution Centre (ABDRC) launches the campaign #Conciliators to promote the conciliation method and off-court conflict resolution to consumers and financial and banking institutions. The benefits of win-win solutions emerged from negotiations on existing contracts is the ultimate argument of this awareness-raising campaign.

Note: In most of the cases, the interviews refer to conciliation files between consumers and banks. The number of casefiles accepted by NBFIs remain low at under 2% of the total casefiles formed in ABDRC.

The video interviews made in the campaign can be viewed here: https://csalb.ro/corpul-conciliatorilor/

Conciliations brings balance back in contacts

The campaign presents recommendations for consumers and banks/NBFIs, details about how negotiations unfold in ABDRC, and examples of situations encountered in the casefiles resolved. Additionally, the view interviews supporting the campaign depict the conciliators in terms of their professional and human qualities.

“The conciliation philosophy is new in Romania, but gains increasingly more momentum in the collective mentality. And this happens because of one very interesting thing: while disputes are tried in courts by the latter of the law, in ABDRC these are tried in equity. More specifically, conciliators attempt to bring back balance between the parties. For us in ABDRC, this campaign is also a reason for professional pride, because conciliators are professionals, people with impressive careers, well-known attorneys, university professors, former judges or CEOs of financial institutions. The expertise they bring in the conciliation cases stand for a guarantee and an argument per se for both consumers and banks as regards the fairness, impartiality and efficiency of the procedure performed in the Alternative Banking Dispute Resolution Centre”, said Alexandru Păunescu, member in the Steering Board of ABDRC.

Recommendations for consumers engaging in negotiations with banks

Dragoș Gheorghe: Many consumers hope that a conciliator would substitute a judge, and render a judgment binding on the bank. What I explain to them is that this procedure is a genuine negotiation, with the conciliator acting as a communication channel between the consumer and the bank.

Nela Petrișor: First of all consumers need to know that there are no cost for them, unlike in court proceedings where the costs are burdensome, plus the costs of expert assessments or attorney fees.

Doru Trăilă: Consumers need to consider that the proposal they make in their applications to ABDRC is, from a negotiation point of view, the maximum they aim for. Nevertheless, negotiation can reach a deadlock if they become inflexible and act like: “I want it all, and if you don’t give it to me, I will leave in anger slamming the door behind me!!”

Recommendations for banks accepting to engage in conciliation

Doru Trăilă: There are highly flexible banks which set up specialized departments to deal with ABDRC conciliations, and have budgets especially approved for such cases. But there are also banks which come and say it bluntly: we have run statistics in the bank, and our chances to win in court are around 70%-80%.

Roxana Mustățea: Banks have very positive reactions to social cases. I cannot recall any instances where banks did not respond to such cases. It could be that their reaction was not to write-off 100% of the debts, but at least they proposed a rescheduling, a period of grace, or even a significant reduction of the principal. There have been no social cases where the bank said: “I need to collect all of my money!”

Mihai Tănăsescu: The banks must understand that they need to have a flexible thinking, and accept solutions that, at a first glance, may appear to favor consumers. In fact, these solutions favor also the bank because they get to keep their clients!

Mircea Stroe: The essence of conciliation is the pursuit for a compromise. One cannot be 100% right, and expect that the other party abide 100% by your stance! Shared justice benefits all!

Camelia Popa: Conciliation is a new philosophy that is approached increasingly more by both consumers and banks. Still, their expectations should not concern only the other party. Because it is a matter of equity here, and the benefits cannot be ripped off by one party alone.

Septimiu Stoica: In conciliation, participation is voluntary for both parties. Moreover, one may withdraw from the procedure at any time. Thirdly, one may refuse the solution proposed by the conciliator. However, what it is most important is to be able to help build a solution that, even if is not 100% satisfactory, it still satisfies 80%, 60% or even 50% of your claims. Anyway, not 0%.

Mihaela Budișteanu: Consumers appear surprised by the fact that they have nothing to pay, they are charged no fees and end up obtaining, many times, the same results as if they turned to courts. However, with significantly less energy consumed. The idea is that they are surprised that such a procedure is available, and it really works! For instance, in what I am concerned, the percentage of casefiles favorably resolved is very high, at more than 90%.

Download
Distribuie:
0
The number of applications for negotiation with banks almost doubled at ABDRC | Survey: What do Romanians expect from banksABDRC Roadshow in Oradea, 20th of June 2019