Report on the alternative dispute resolution activity as at 30.09.2019

The first three quarters of 2019 observe a constant development of the work of the Alternative Banking Dispute Resolution Centre (ABDRC). The applications received before the end of Q3 2019 point to a 130% increase compared to the number of applications received during the entire previous year. As regards the casefile formed, during the three quarters, these already accounted for 95% of the total number of casefiles formed in 2018. A special category is represented by the amicable settlements occurred between consumers and banks, having first referred the matter to ABDRC. To date, the parties entered into more than 183 such settlements, compared to only 97 settlements during the entire previous year (2018). 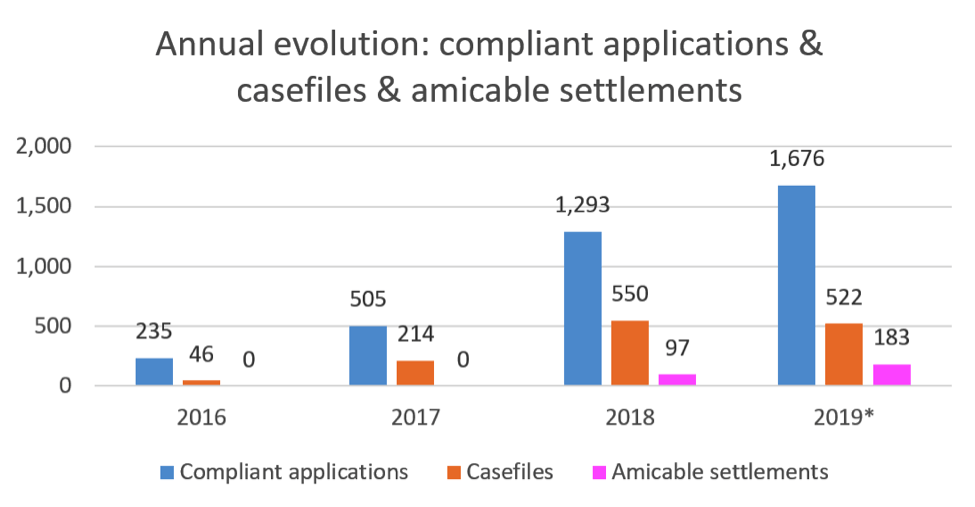 In the end of Q3 2019, as many as 328 consumers made peace with their banks or NBFIs with the help of ABDRC, meaning 130% more consumers than in the end of Q3 2018. During the same period of last year, only 252 Romanians benefited of favourable solutions following the negotiations carried out with the financial and banking institutions.

The online possibilities to submit applications (the application available on the website www.csalb.ro, as well by email office@csalb.ro) were the option of choice for 85% of the Romanians who submitted applications to ABDRC.

Of the total number of compliant applications received in Q1-Q3 2019, 1,392 concerned issues related to their relation with the bank, whereas 284 concerned different issues occurred between consumers and NBFIs.

In the end of Q3 this year we counted approximately 3,600 queries by phone.

Their break-down on banks/NBFIs is as follows:

Qualification of the 514 casefiles undergoing the procedure with proposed solution (involving banks):

Qualification of the 8 casefiles undergoing the procedure with proposed solution (involving a NBFI):

Means of filing compliant applications (involving both banks and NBFIs):

Most of the applications received from customers concerned:

STATISTICAL INFORMATION IN THE END OF Q3 2019:

The work of ABDRC continues the ascending trend of 2018 with a strong increase in the number of applications received, casefiles formed, resolutions rendered, and amicable settlements reached between consumers and banks.

The key drivers of these developments are: more sources of information about the work of the Centre available to consumers and greater openness of banks to conciliation.

Part of the IT App (available on the website www.csalb.ro) which consumers can use to submit applications to have their disagreements with banks/NBFIs resolved, users are questioned about their sources of information about ABDRC. 58% of consumers found out about the existence and benefits of the Centres in the online environment, whereas 29% of them received such information from banks or NBFIs.

The ranking returned by the IT App, based on the answers of 360 users, is as follows: 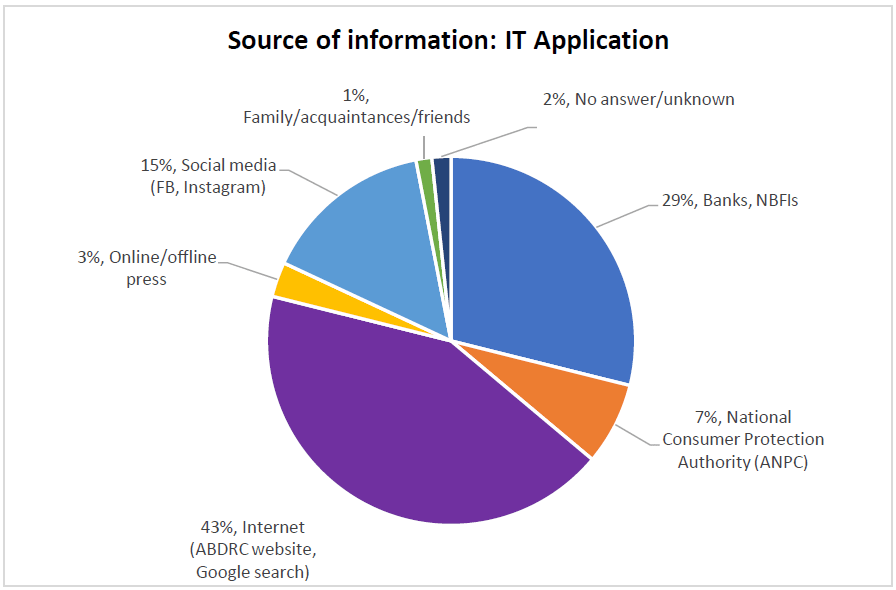 The Alternative Banking Dispute Resolution Centre (ABDRC) is an independent non-governmental, apolitical, and not-for-profit legal entity of public interest established under the Government Ordinance no. 38/2015 on alternative resolution of disputes between consumers and traders, which transposes at domestic level Directive 2013/11/EU on alternative dispute resolution for consumer disputes and amending Regulation (EC) no. 2006/2004 and Directive 2009/22/EC.