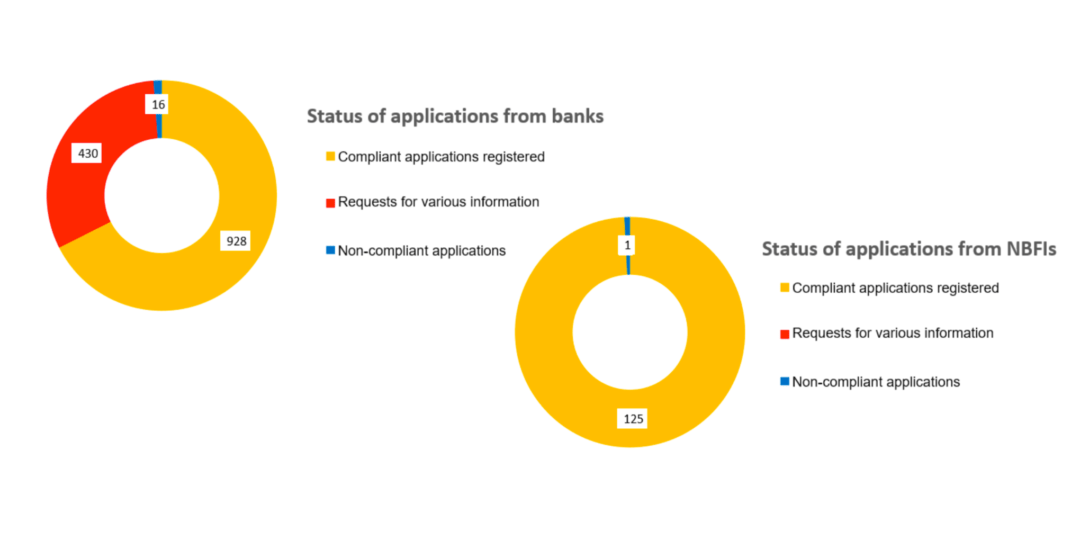 REPORT ON THE ALTERNATIVE DISPUTE RESOLUTION ACTIVITY AS AT 30.06.2019

For the four consecutive year, the Alternative Banking Dispute Resolution Centre (ABDRC) reports an increasing number of applications and conciliation casefiles formed. The mid-2019 results are better than in any other previous year (the applications excepted to be received by the end of this year could be double the figure reported last year). As regards the casefile formed, by the end of the first half this year, these already accounted for 63% of the total number of casefiles formed in 2018. A special category is represented by the amicable settlements between consumers and banks, having first referred the matter to ABDRC. The parties entered into more than 100 such settlements in H1, which is more than the entire last year. 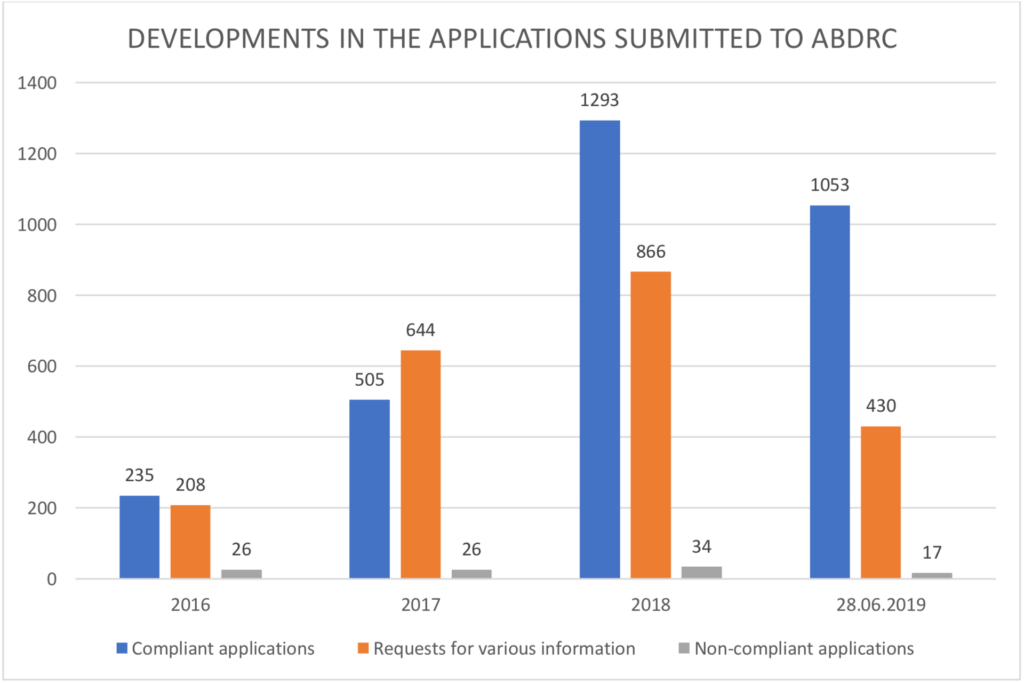 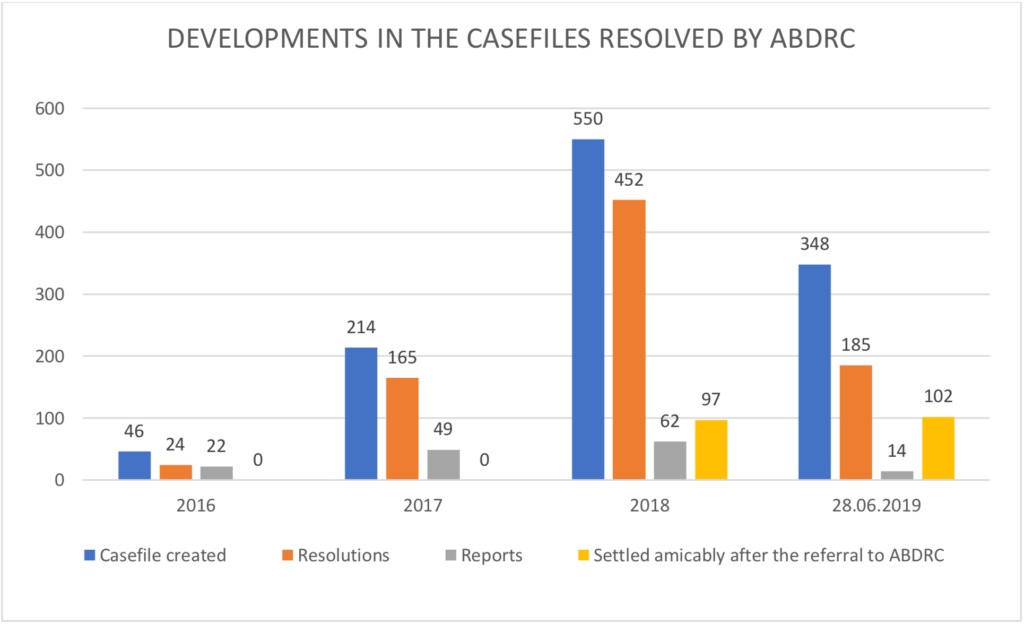 In the first six months of 2019, as many as 287 consumers made pace with their banks or NBFIs with the help of ABDRC, which figure is 52% above the entire H1 2018. During the same period of last year, only 188 Romanians benefited of favourable solutions following the negotiations carried out with the financial and banking institutions.

The online solutions (the application on the website www.csalb.ro, as well by email) were the option of choice for 90% of the Romanians who submitted applications to ABDRC.

– Of the 5 casefiles involving NBFIs formed, only one procedure closure report was issued.

In the end of the first half of this year, we counted approximately 2,100 requests made by phone.

Their break-down on banks/NBFIs is as follows:

The bulk of the applications received from customers refers to: 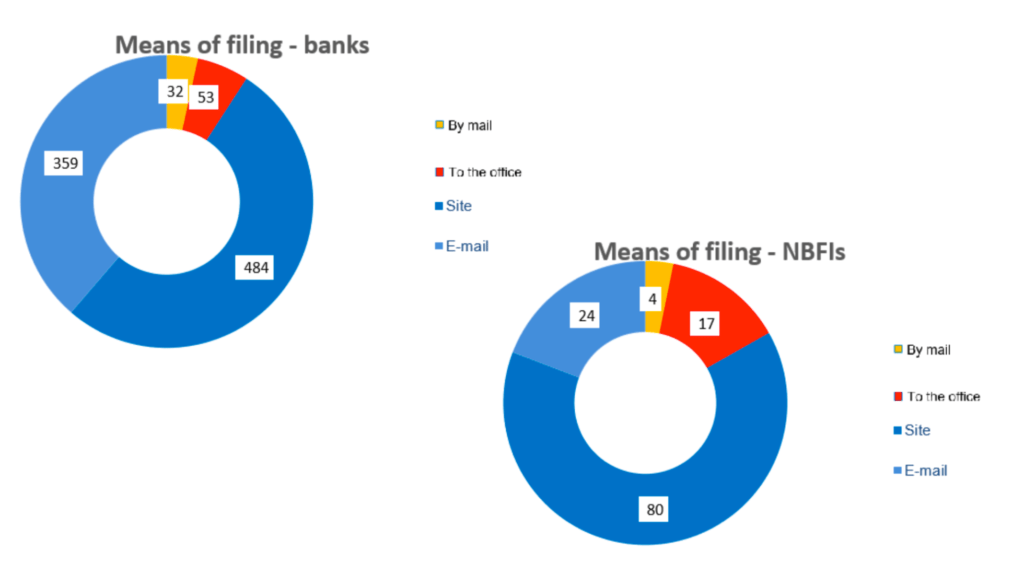 The workload of ABDRC follows the ascending trend of 2018, at a sustained and even faster faced in the first half of 2019. The following changes in the behaviour of both consumers and traders towards ABDRC have been seen:

o on one hand, increasingly more consumers have learned about ABDRC and are currently accessing the Centre’s services, in their efforts to have their disputes with the traders in the financial and banking sector resolved (increasingly more diverse applications). The online environment has become the main source of information about the ABDRC and its work for consumers (press, social networks, the ABDRC website), followed by the traditional media, the information material available in the bank units and the National Consumer Protection Authority (Note: the information about awareness of ABDRC obtained with the aid of the different information media were collected in a survey conducted by Finzoom.ro on a sample of 1,390 persons);

o on the other hand, traders have accepted to participate in increasingly more conciliation procedures, but this rate lags behind the increase in the number of applications submitted by consumers.

o additionally, all the banks in Romania accepted conciliation requests from consumers. This is an indication of the fact that the banks have understood the role played by ABDRC, as well as the benefits of the ADR procedures;

o some banks report very low application rejection rates, for instance of 20% of the total number of applications concerning them, or in the range of 30%. On the other hand, there are still banks which reject more than 50% of the applications received from consumers; however, the first category prevails over the latter;

o nevertheless, the developments seen in the past years (from 2016 until 2019) point to a significant reduction in the number of applications registered with ABDRC, but refused by banks (no casefile formed): from 70% in 2016 down to 40% in the end of 2018. For the running year, one of the objectives pursued is to reduce the rate of applications rejected by the banks below 30%.

Download
Distribuie:
1
BANKS SPEAK FOR THE FIRST TIME ABOUT NEGOTATIONS WITH CONSUMERSThe number of applications for negotiation with banks almost doubled at ABDRC | Survey: What do Romanians expect from banks