ABDRC Recommendations to Banks, after Close to Two Years of Pandemic

After close to two years of pandemic, we look into the changes that have occurred in the relationship between consumers and banks/NBFIs. ABDRC conciliators made a number of recommendations to the financial and banking institutions further to this years’ meetings between the Centre’s representatives and those of banks and NBFIs. During these close to two years, consumers filed the highest number of requests to negotiate with banks and NBFIs, meaning more than 4,750 in 2020 and 2021 together, to date. Still, approximately one third of them were aimed at having consumers deregistered from the Credit Office, an instance where ABDRC can only play an immaterial role (only about 10% of these requests being settled directly by the banks and NBFIs that entered them in the Office’s register).

29 November, Bucharest. 2020 and 2021, marked by the sanitary crisis, have seen many changes in the conciliation work rendered by the Alternative Banking Dispute Resolution Centre (ABDRC). During these close to two years, consumers filed the highest number of requests to negotiate with banks and NBFIs, meaning more than 4,750 in 2020 and 2021 together, to date. Still, approximately one third of them were aimed at having consumers deregistered from the Credit Office, an instance where ABDRC can only play an immaterial role (only about 10% of these requests being settled directly by the banks and NBFIs that entered them in the Office’s register). Representatives of the Centre and of the financial and banking institutions sat in a number of meetings on this topic in the fall of 2021. The Centre’s conciliators made a number of recommendations to increase the number of negotiations concluded with conciliation of the parties via ABDRC.

“These close to two years have first taught us how to negotiate online or by phone, due to restrictions. Banks have seen changes, too: they were forced to adapt rapidly to the financial difficulties that many of their retail clients still experience due to the pandemic, and to increase their support measures where these proved not to be enough. Consumers too need to adapt as fast as possible to the negotiation mechanics and the direct interaction with the bank. For some of them, this was a first since they signed their loan agreement. We believe that relationship between the bank and the consumer should be more open to dialogue, and fortunately, ABDRC can build this communication bridge. This is precisely why we urged banks to put an end to their practice of closing the case when consumers file applications that are insufficiently documented. We asked credit institutions to advise us when an application does not have enclosed the supporting documents required for their claimed situation for ABDRC to ask for the said information directly from consumer. Even some consumers might not know how to fill out or word correctly an application to negotiate with the bank, we still strive to give the chance to enter this conciliation procedure to as many of them as possible. An important matter that ABDRC conveyed during the discussions we had with bank representatives was, in fact, the proposal to remove pending court proceedings from their list of grounds of rejecting by default the conciliation procedure. In other words, since close to 35 such proceedings were stopped this year to make room for amicable settlement via ABDRC, we encourage banks to replicate these examples of amicable settlement of disputes pursuing conciliation as an alternative to the classical court proceedings. The benefits, in all possible respects, are incomparable higher for both parties”, says Alexandru Păunescu, member of ABDRC Steering Board.

Where to adjust? Reactions of conciliators 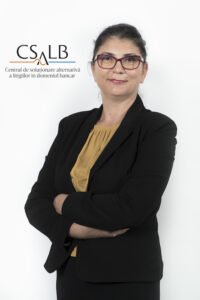 Camelia Popa: In all cases (n.n. applications accepted for negotiation by banks/NBFIs), my recommendation for the representatives of the financial and banking institutions would be review them objectively and devise win-win solutions. Moreover, banks should not distinguish between the applications filed by consumers experiencing health or social problems (the requests of whom are justified by such situations), and the applications concerning contract clauses, fees, the loan currency, or other technical issues. This latter category is equally justified, even in absence of the social argument. I believe that negotiations should be accessible also to consumers without serious financial, family or social problems, but who report genuine issues in their contracts with the banks. Specifically, people who can paid by card, but detect an inequity, an irregularity that needs to be addressed. 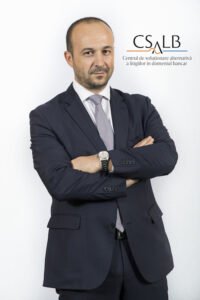 Mircea Stroe: Indeed, banks are willing to expeditiously address prevailingly the social cases, or cases where the financial stake is low. For the other cases, with high stakes, decisions are rendered difficult by a long clearance flow. And from here, delaying a solution or prolonging the discussions and the time-limits is just one step away. This erodes consumers’ trust, and creates the preconditions for them to refuse the solutions, even when these are to their benefit. In fact, the lack of trust lingering before approaching ABDRC is only extended, and the consumer becomes suspicious to virtually any proposed solution, even when this benefits them before the bank. 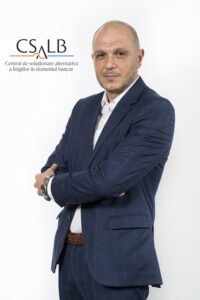 Valentin Cocean: There are banks that, while being rather rigid in the beginning, eventually enter negotiation and accept the consumer’s application. In the end of the negotiation per se, when the conciliator proposes a solution, to our surprise, we notice that the said banks end up refusing even three or four different solutions that we offer them. In such an instance, I wonder why they entered negotiations in the first place since they remained as rigid to the end, and did not make any proposals to help find a mutually-acceptable solution, or offered the consumer virtually anything? 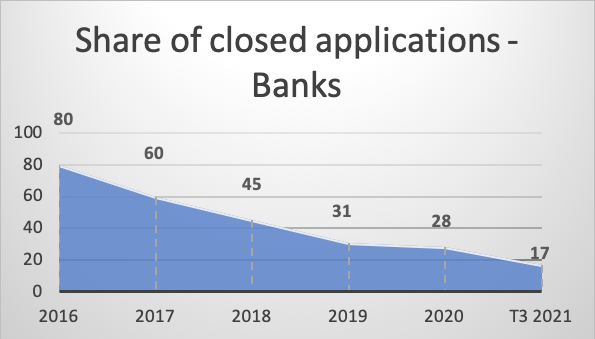 We never stop trying to make the negotiation procedure increasingly more efficient, and such recommendations can be made even in the context of the lowest number of applications unreasonably rejected by banks seen over the last close to six years of ABDRC operation: from 80% in 2016 down to 45% in 2018, and further down to 28% in 2020. During the first nine months of 2021, the share of applications which were unreasonably closed by banks dropped down to 17%, and the recommendation that ABDRC makes to both banks and NBFIs is to strive to keep this below 20% by the end of the year. This is an actionable objective, so much the more that there are already large banks the rejection rate of which has already dropped below 10%, or even below 5%.

About ABDRC: ABDRC is an entity set up under a European Directive, and intermediates, free of charge and in not more than three months, negotiations between consumers and banks or NBFIs, for contracts/agreements in progress. Consumers from any county of the country may file applications with the Alternative Banking Dispute Resolution Centre (ABDRC), filling out an online form directly on the website www.csalb.ro. Once the bank accepts to enter the conciliation/negotiation procedure, a conciliator is appointed. ABDRC works with 19 conciliators, of the best specialists in law and with relevant experience also in the financial and banking field. Everything is settled amicably, and the understanding between the parties has the power of court judgment. More information about the work of the Centre is available by phone at 021 9414 (charged a normal rate).

Download
Distribuie:
0
What Have Consumers Asked from the Banks? Benefits Obtained from Negotiation, 70% Higher than before the Healthcare CrisisReconciliations of EUR 1.24 Million between Consumers and Banks