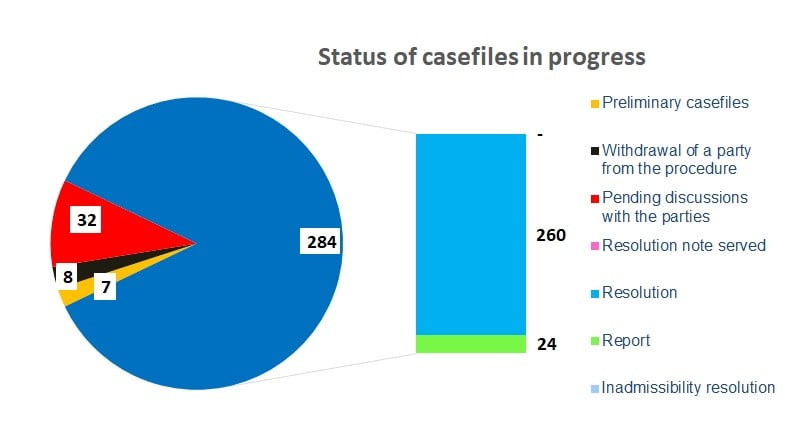 REPORT ON ALTERNATIVE DISPUTE RESOLUTION AS AT 30.06.2022

During the first six months of 2022, as many as 504 consumers went through the entire conciliation process (application filing, negotiation, final resolution – a solution accepted by both parties), or reached an amicable settlement directly with banks/NBFIs, having first approached ABDRC. The situation is better than in 2021 (up by 60%) when, during the same period, 314 Romanians were reported in one of these two situations.

Starting with Q1 2020 legal entities can also refer to ABDRC cases related to payment services and electronic money issuing. ABDRC received 6 such applications during the reference period, but the financial institutions these were intended to turned down 5 of them, and only one application became a case and concluded with a resolution.

The number of applications received in the first half of 2022 (1,335 applications) stays relatively flat compared to H1 of 2021 (1,229 application, i.e. an increase of approximately 10% in the current year). This organic evolution is driven also by both the months still affected by the sanitary crisis, and the general rise in prices (particularly after the onset of the war very close to Romania), as well as by the evolution of the ROBOR index, which is used to calculate the monthly payable instalments for the floating-interest loans granted before May 2019. Many consumers experience genuine difficulties in making the due payments and these justified circumstances require identification of solutions to rebalance the contractual obligations (with the applications being submitted directly to creditors, or via ABDRC).

In this statistical slot we need to highlight also that, in the first semester of this year, the applications for deregistration from the Credit Register (CR) observed a material development. In mid-2022, we see 592 applications for deregistration from the CR (168 intended at banks + 424 intended at NBFIs), already overtaking the figure of the entire 2021 (584 such applications). It should be recalled that most of the applications concerning issues in relation to the Credit Office, the First House programme or assigned loans are closed because, on a case-by-case basis, these are governed by a special piece of legislation which leaves but limited room for negotiation.

The total number of casefiles formed at the end of the first half of 2022 reached 333, of which 331 involved banks, and only 2 such casefiles concerned NBFIs (compared to the first six months of 2021, when 242 casefiles were formed, which means an increase of approximately 40% in the current year). Of the casefiles formed this year, 261 concluded with a resolution (the parties accepted the solution proposed by the conciliator), and additional 40 casefiles are still being processed. In 24 cases, the parties rejected the solution the conciliator rendered and a report was issued, whereas in 8 cases, one of the parties withdrew.

In the end of the first half of this year, we counted approximately 1,400 requests made by phone, and 144 persons/consumers access the chat function on the website of ABDRC.

The break-down of applications on banks/NBFIs is as follows:

Classification of the 855 compliant applications:

Classification of the 331 casefiles in the procedure with proposed solution/conciliation:

Classification of the 480 compliant applications:

Qualification of the 2 cases in the procedure with proposed solution/conciliation: 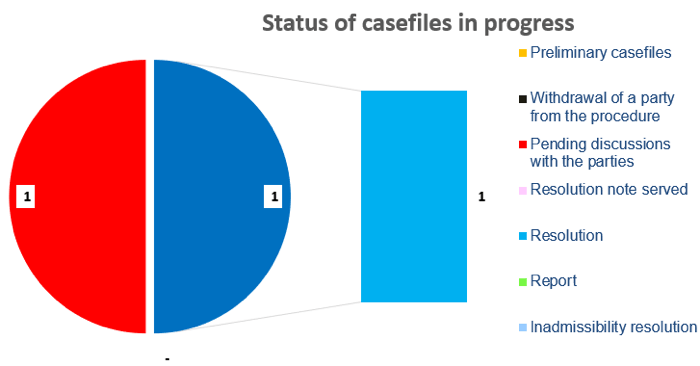 The main reason for closing an application is the refusal of traders to have the dispute settle via ADR procedure, and the reasons for closing fall into several categories:

The statistical data shows that the number of consumers who approached ABDRC in H1 2022 observed a slight increase (approximately 10%) compared to H1 2021. If we are to relate to the cases solved (with resolutions or with amicable settlement further to a referral to ABDRC), the results at the end of S1 of this year are 60% better than in the same period of last year, with increase in both the number of cases formed, and the number of direct amicable settlements between the parties (having first approached ABDRC). This increase is driven including by the number of cases effectively solved and concluded with a resolution/the parties reaching an agreement (as an effect of the increased willingness of the parties to negotiate).

The ABDRC services continue to be accessed by the Romanians who have problems with banks/NBFIs. The benefits of conciliation: the court proceedings avoided and the continued contractual relations between parties, the short case settlement time (time average of 33 days/case in 2021), the procedure is free of charge for consumers, and the expertise of conciliators are important benefits for both consumers and the financial and banking institutions involved in these negotiations, particularly during economically difficult times (the effects of the pandemic and of the war continue to be felt). In this context, the conclusions drawn for the first six months of 2022 are as follows:

The WEBSITE www.csalb.ro makes available also for legal entities an online tool, which allows for faster and smoother submission of the conciliation applications. On the first page of the website, consumers are prompted to access this application by filling in an application. The documents entered in the registration form are uploaded into the app, and their processing time is approximately one hour. The application was setup in observance of the principles of the General Data Protection Regulation (GDPR).

The Alternative Banking Dispute Resolution Centre (ABDRC) is an independent non-governmental, apolitical, and not-for-profit legal entity of public interest established under the Government Ordinance no. 38/2015 on alternative resolution of disputes between consumers and traders, which transposes at domestic level Directive 2013/11/EU on alternative dispute resolution for consumer disputes and amending Regulation (EC) no. 2006/2004 and Directive 2009/22/EC.

Download
Distribuie:
0
92 of 100 Consumers Involved in Negotiations Have Their Problems with Banks Solved | ABDRC Calls upon Judges to Recommend Conciliations to the PartiesWhat can banks, consumers and judges do to overcome the current financial difficulties through negotiations?